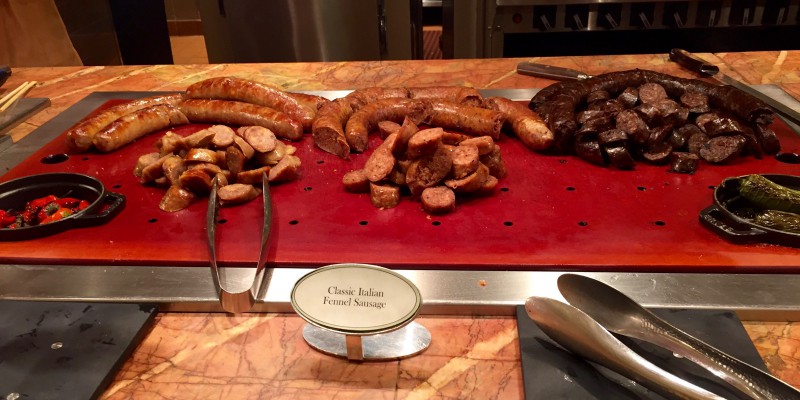 Things to Know About the New Wynn Buffet

The Wynn buffet, simply known as The Buffet, is a luxurious restaurant that combines the benefits of a fine dining restaurant with gourmet food and of a buffet with an easy vibe. You will immediately like its bright and airy ambiance with its marble floor accents, colorful canopies, and gorgeous topiaries as well as its array of mouthwatering dishes and desserts.

Before entering its doors, you may want to know a few things about the restaurant so as to have a deeper appreciation for its delights. You may even be delighted with the fun facts, too.

Russell Parker, the executive chef, has introduced 120 new dishes to the buffet. These dishes are prepared and presented in smaller portions, which means guests can take a sample of virtually everything yet still have room for more of the dishes and desserts.

You will find plenty of gourmet food to choose from with many of them actually feeling like your grandmother’s cooking taken to the next level. Your choices include:

You can also get vegan dishes with the hostess, chef, and server pointing out these choices. You may also hit the salad bar with its bowls of fresh fruits and vegetables to make your own personalized salads.

First of Its Kind

The Buffet also takes pride in its open-flame Woodstone parilla grill, which is touted to be the first in North America. Here, you can get South American barbecue in the Brazilian rodizio style. You will love the slow-roasted meats including whole roasted lamb with succulent slices, thanks to the infusion of garlic and rosemary, and prime rib.

And then there’s the joy of bottomless beverages with choices that include Bloody Mary, mimosa, wines, and beers as well as red and white sangria, and the seasonal cocktails like Endless Pours. You have several choices in domestic, international and craft beers, too.

The Buffet will not be among the best buffets in Las Vegas without mentioning the delights that the desserts give! You have several sweet options including a pâtisserie with nearly 40 options including fruits, rice cereal treats, and marshmallows dipped in dark, white or milk chocolate. You even have several gelato choices with a few vegan options.

What are you waiting for? You simply have to try The Buffet at Wynn on your next Las Vegas visit!