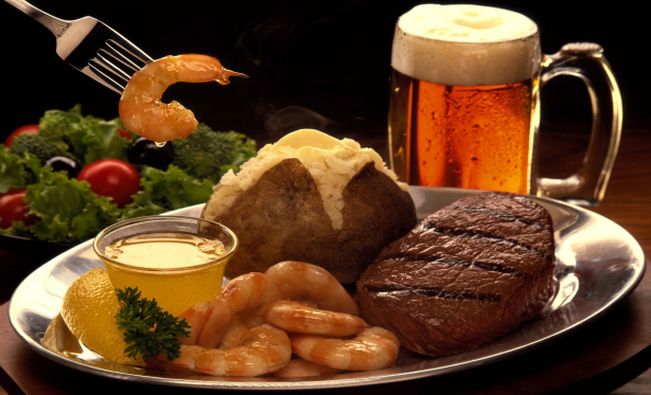 You may have heard of wine-and-food pairings since these are the common combos. But when you have international beer festivals, such as the Oktoberfest, and restaurants with a German beer garden vibe, such as Peter Luger, serving a wide range of beers, you should start thinking about the best beer-and-wine pairings.

Keep in mind that beers, like wines, have their own distinctive flavors, aromas, and colors. Pairing the right type of beer with the right type of dishes will elevate their flavors from the delicious to the sublime!

Steaks come in a variety of cuts, such as rib eye, filet mignon, and top sirloin, but all of these dishes are characterized as heavy, rich, and filling dishes. Be sure to match the steak’s intensity of flavors with heavier beers so that one does not overpower the other.

Red ales are usually the first choice for grilled steaks because of their heavy roasted aroma and flavor, which allows them to complement the juiciness of the meat. Porters can also be paired with steaks especially with a porterhouse steak since their full-bodied flavors complement the rich, meaty texture of rare steaks.

Stout beers are best paired with steak tartar and rare steaks because their smoothness nicely contrasts with the nearly-raw meat’s texture.

When it comes to melt-in-your-mouth texture, pulled pork is one of the best base dishes. Add in its rich yet refreshing combination of garlic, onions, and herbs in a saucy texture and you have a dish that can be paired with several types of beer.

Pales ales are the first choice for pulled pork pairings because of their higher hop content, which means that the beer can cut through the seasonings and spices. Their sweet notes also play well with the pulled pork’s tangy flavors especially with a honey ale-spicy pulled pork combo.

Porters, specifically smoked porters, are also great beers to combine with pulled pork. Both the beer and the meat have smoky flavors that enhance each other while the subtle hints of chocolate in porters enhance the slight sweetness of the pork’s sauce. Who says that hamburgers should only be served with soft drinks, as is the case in fast-food joints? Hamburgers are meat-based food, too, so it makes sense to pair them with beer.

Just be careful as it can be tricky to pair a hamburger with beer – too light and the beer will be overpowered by the meat, too heavy and it will overpower the beef, too. Choose pales ales for traditional hamburgers made from high-fat meat and pilsners for hamburgers with lean meat. Even veggie hamburgers can be paired with wheat beers.