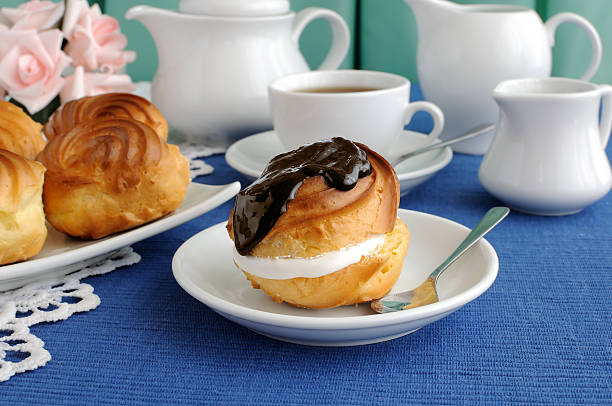 An éclair is a type of choux pastry invented by the French and it is often filled with custard or cream and dipped in fondant. You’ve probably heard of the chocolate éclair which is filled with pastry cream and topped with chocolate fondant.

How the Éclair was Born

In the 1860s, éclair was used to refer to a pastry that was known in France as the petite duchesse. The pastry is believed to have been first created by Antonin Carême, a French chef, who also innovated other desserts like the Napoleon and Charlotte cakes.

The éclair is a timeless classic and it has also seen a rise in popularity. You can now find these treats with trendy fillings like mocha cream and matcha tea. Some pastry shops even have eclairs with fruit glazes and fruit toppings.

So What Exactly is an Éclair?

For an éclair to be deemed as an éclair it needs to have choux pastry, the same one used in making profiteroles, cream puffs and gougères. Choux pastry rises only through steam and does not require any baking soda, baking powder or yeast.

Basically, you will heat milk, water, salt, sugar and butter and bring it to a boil, adding in bread flour, then allow it to cool down before you add eggs. The dough is placed in a pastry bag and afterwards piped onto a baking sheet according to the shape of the éclair.  The dough is then baked at a high temperature to generate the steam which will then trigger the dough to rise. Once it has achieved this, the temperature is then lowered just enough to brown and bake the pastry.

Once it’s done, you will get an airy pastry with a hallow but sturdy shell. Once it’s cooled you can then add the filling you want but it’s necessary to make the filling thick so as not to make the bottom soggy. As for the topping/icing, you can use a ganache or fondant – it’s important to make sure that the icing hardens quickly. You can then add other garnishing over it.

What’s the Difference Between Éclair vs. Long John?

You might think they’re one and the same but the éclair and Long John doughnut are completely different. I mean, sure they’re both decadent and delicious – I would eat both in a heart beat. But they are not exactly the same.

Eclairs use choux pastry which uses steam to make it rise. Long John doughnuts on the other hand use yeast. The former is baked, while the latter is fried.

Another key difference is the fillings used. These days pastry chefs and home chefs can pretty much put whatever they want as fillings but eclairs have always used traditional French fillings like chiboust cream and crème patissiere. Long Johns may have Bavarian cream or custard filling.

As for the taste, you will most likely not notice much of a difference unless you’re well-versed about pastries. Choux pastry which is what an éclair is, has lots of eggs. The shell is flaky and will have hints of butter and egg taste. Long John doughnuts on the other hand have a thicker texture and you will notice the yeast flavor.

Where to Find the Best Éclair in the World?

Without a doubt, Paris makes the best eclairs in the world. France, after all, is the birthplace of the éclair. We’ve heard the Stohrer makes the most heavenly éclair and they are located in

51 RUE MONTORGUEIL. The L’Éclair de Génie is also highly recommended and they have stores in Paris, Tokyo and Yokohama. In New York there’s Pomme Palais patisserie. You can also check out Bakery Lorraine for some mouthwatering eclairs and other pastries.

Get a glimpse of L’ Éclair de Genie here: