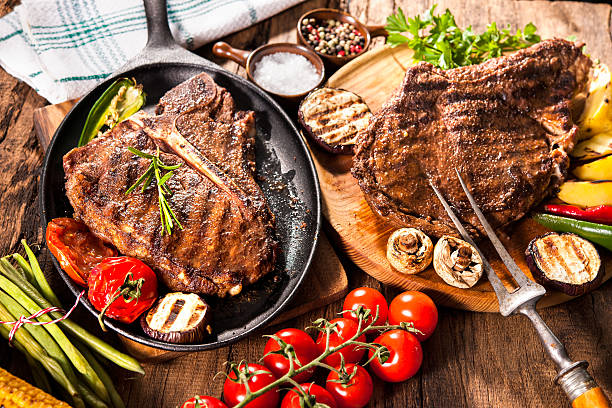 If you’ve enjoyed a meal at a high-end steakhouse like Fleming’s Steakhouse, you’ve probably noticed that they offer a range of cuts on their menu.  There’s the filet, sirloin, New York strip, prime rib and many others. If you’re new to all this, it can be tough to decide which one to choose. Each steak cut has its own unique texture and flavor profile that even steak aficionados can spend hours debating the best cut of steak.

When it comes to steaks however, two of the most popular options are: ribeye and porterhouse. Let’s take a closer look at these two options so you can decide which one you’ll get the next time.

The rib eye steak is called as such because it’s cut along the cow’s upper rib cage closer to the neck and head.  Since this area of a cow is fatty and does not tend to have a lot of movement, the ribeye tends to be tender and well marbled.  But for some people the ribeye can be too fatty.

The porterhouse steak, on the other hand, comes from the cow’s lower rib portion near the rear or loin.  This area might not get a lot of movement based on the cow’s anatomy, but unlike the ribeye, has a lower fat content.  There are two different beef cuts for the porterhouse – the tenderloin and strip steak.

The key differences between these two kinds of steak comes down to fat and bone content.  Ribeye steaks have “meaty” flavor due to the high fat content. The porterhouse has the T- shaped bone you’re probably familiar with. The ribeye can either be boneless or bone-in.

Take note also that the porterhouse which has 2 different steak cuts also has 2 kinds of textures and level of tenderness.

There is also a different in the taste of both steaks. Both the strip and the loin sides of the porterhouse are flavorful. However, the ribeye is the winner as far as flavor goes due to its marbling and fat. But as far as tenderness level, the porterhouse is the clear winner.

When it comes to cooking method, there are differences between the two as well. The ribeye may or may not have one bone towards the outside of the beef. This means you can grill it or fry it in the pan. You can even broil it in the oven. Just be careful when grilling your ribeye steak since the open flame is prone to flare ups which could melt the fat. It usually takes 2-3 minutes per side to cook a ribeye.

By contrast, a porterhouse which has a large bone at the center of the meat, makes it difficult to get a good sear in a hot pan. This is why porterhouse steaks are best in an open flame grill. It has a lower fat content so melting fat wouldn’t be something you’d worry about during flare ups. It usually takes 3-4 minutes per side to cook a porterhouse.

Ribeye vs. Porterhouse vs. T-Bone Steak

Learn the differences between ribeye vs. porterhouse vs. T-bone here:

What’s The Best Steak Cut & Why?