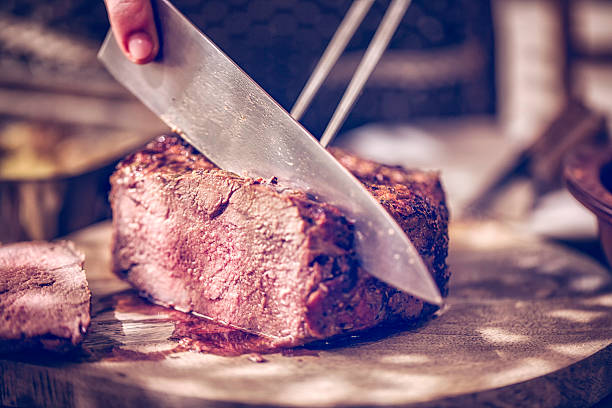 Ranking the Worst to the Best Steak Cuts

Who doesn’t love a good steak? For ordinary people like you and me, it’s probably not something we eat regularly – a ribeye steak at Benjamin’s Steakhouse cost $64.95! But when we do get a chance to enjoy a gourmet meal, we want to make sure we order the right steak. Having said that, check out this list of steak cuts that we have ranked from worst to best:

The sirloin (cow’s hip) is a popular beef cut for steaks but there are 3 kinds of sirloin – top sirloin, rear sirloin, and the bottom sirloin. They each vary in terms of tenderness, flavor and quality.  The bottom sirloin is the most inferior of the 3, being taken from the cow’s upper hip section. It may be an excellent cut of meat for roasting but it’s not a good choice for steak. It’s chewy and not as flavorful.

If you want steak that’s not too tender but not tough, this is the steak to get. Moisture and flavor are also great since it has some marbling in it. But this can be a pricey cut due to the marbling.

You’ve probably not come across this steak but it’s well-known in Argentina. The vacio is the flank’s prime cut, hanging beneath the loin encased in layers of fat. In Argentina and even here in the US, the steak is slow-grilled and sliced. The meat is very flavorful and well-marbled.

Earlier we talked about the sirloin and learned that the bottom sirloin is far less superior than the top sirloin. The latter is usually presented in the form of a boneless steak that is tender and flavorful. It has nice marbling and fairly lean. Plus it gives you more bang for your buck, as it’s often cheaper than say the T-bone or ribeye.

A T-bone steak has both a strip of top loin and a slab of tenderloin so you’re getting good flavor and equally good texture. This is the steak to get if you want a good ol’ fashioned steak. But the downside to the T-bone is that they’re usually expensive.

Also known as flat iron steak or boneless top chuck steak, this is a modern beef cut that comes from the shoulder area (top blade) of a cow. The meat is juicy, has rich flavor and good marbling. Many chefs liken the flat iron steak’s texture and flavor to the filet mignon. It’s recommended that this steak is cooked to medium-rare and seasoned liberally.

The porterhouse steak is the same cut as the T-bone steak except that it’s thicker and has more tenderloin than the latter. The only reason it’s 4th on this list while the T-bone ranks 6th is that the porterhouse is bigger.

Hanger steak isn’t very popular but it’s completely underrated. It’s cut from the short plate and it’s absolutely full of flavor. Hanger steak is also easy to cook and usually budget-friendly. The main issue with this particular steak is that its supply is scarce since you can only get a single cut of hanger per cow/cattle.

The tenderloin is a muscle running along the cow’s spine to the ribs with very little connective tissue. It is very tender and flavorful, and has been used to make some of the finest steaks in the world. The filet mignon is cut from the tenderloin and is considered the best cow’s meat.

Arguably the best steak, the ribeye is taken from the cow’s rib and has excellent marbling. The flavor is impressive – incredible amount of beef flavor in it. It’s also juicy and very soft. If you’re looking for the ultimate steak, go for the ribeye steak.

The Kobe ribeye cut from the Tajima cattle of Japan is the perfect ribeye. Watch this video to know more about it.

Day in the Life of a Japanese Wagyu Beef Farmer