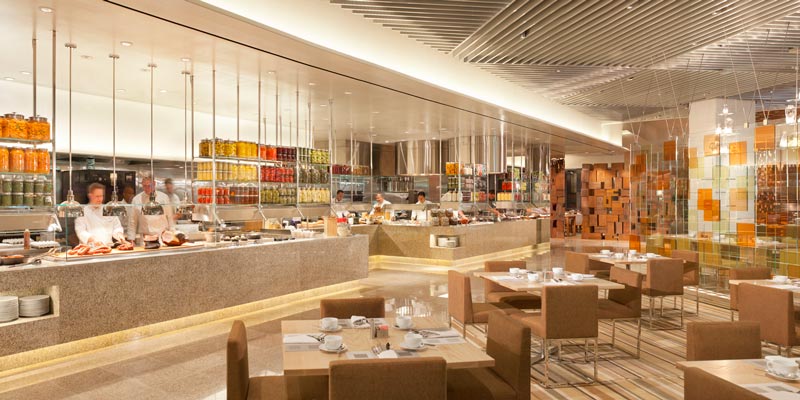 The Caesars Palace buffet, the Bacchanal Buffet, has established a reputation for being the 21st century representation of the culinary decadence of an ancient Roman feast. Diners are treated to an over-the-top feast consisting of regional comfort food and international cuisines with the dining experience akin to gourmet dining – truly, a memorable buffet experience worth repeating!

The Bacchanal Buffet was closed in 2000 but has since re-opened its doors to give its enthusiastic customers the enviable opportunity of once again enjoying its gourmet food and drinks. Set within a spacious 25,000-square foot restaurant in Caesars Palace, it is better than the original with its wider variety of food, richer décor, and faster lines.

But there are many things from the old buffet that have been retained in the new one mainly because of their appeal. For example, toga-clad waiters and waitresses serve diners their wines, a sight that makes it easier to believe that the place is ancient Rome set in contemporary times.

Such over-the-top dining experience extends to the food itself. You can choose from more than 500 dishes served daily, which means that it will take several hours to appreciate each one and several days to actually sample everything. You will not leave the restaurant unsatisfied because virtually every international cuisine is represented here.

The Bacchanal Buffet has nine show kitchens including:

Each of the show kitchens also has a live action station with small-sized portions of food and plated dishes. The buffet even offers plenty of food options for gluten-free, vegan, and vegetarian diners in addition to the meats, pastas, and noodles for majority of the population.

You will also have plenty of opportunities to customize your orders. You can, for example, have your sushi, ramen, pho, crepes, and omelets customized while you watch and wait.

Of course, the wait staff and chefs are among the best. It seems that everybody from the chefs to the hostesses, waiters, and bus persons can explain the foods available.

Aside from the show kitchens, the restaurant also has three element-inspired dining areas – the glass area with its shimmering chandeliers and glass partition walls; the wood area with its different-sized stacked blocks; and the steel area with its re-purposed metal pieces arranged in an eclectic style.